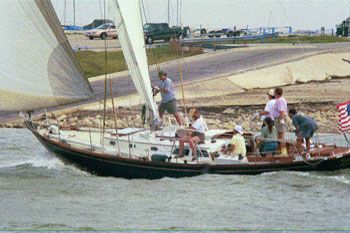 There is a reason Hinckley has the most revered name in the yachting world. They are pure beauty, both at the dock and underway. When you see a picture of a sailboat on the cover of an elegant book, the chances are pretty good that it’s a Hinckley.

The Hinckley Company built only nine Hinckley Competition 41’s. “Southern Cross” is one of them. Her keel was laid in 1969 and she has been refurbished in recent years. Her fully-functional wood-burning fireplace is just one example of what sets her apart. Under sail (or at the dock), she is pure grace. Her sleek freeboard, sweeping overhangs, and flag-blue hull will turn any head. Don’t be surprised if you see other boats maneuver closer and begin taking pictures. In fact, SAIL magazine specifically identifies the Hinckley Competition 41 as the example of a sailboat that has those distinguishing characteristics that make a sailboat beautiful (October 1998 issue).

“Southern Cross” isn’t like any other sailboat in the area. In fact, she’s not even in the same ballpark with most. She certainly doesn’t have that “Clorox bottle” appearance common to too many sailboats these days. We are proud of her and are confident in claiming she is the most picturesque sailboat in North Texas, perhaps in the whole state.

There are several different ways you can experience “Southern Cross”.

Group sizes can vary substantially. For intimate settings, we recommend a maximum group size of six. Groups up to twelve can be accommodated.